Charleston Gazette-Mail: A remarkable concert of firsts by the Delphi Piano Trio

Bolcom's "Piano Trio (2014, written for the Delphi) moved fluidly among modernist styles with massive dark textures in the opening of the piece to Gershwin-like bluesy harmony at the start of the slow movement." 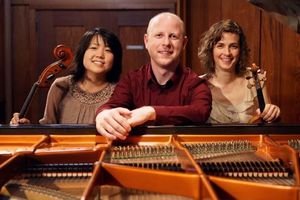 The Delphi Piano Trio made it a night of firsts in its concert for the Charleston Chamber Music Society Saturday night at Christ Church United Methodist. The San Francisco-based ensemble played the first piano trios by Beethoven, William Bolcom and Felix Mendelssohn. Each came from a different part of a composer’s career...

...The adage is “write what you know.” The American composer William Bolcom’s career has spanned the creation of operas, string quartets, symphonies and concertos along with a massive two-hour-long setting of poetry by William Blake for orchestra, jazz band, rock band, solo singers and choirs. Plus he was a leader in the ragtime renaissance of the 1970s and has been a lifelong champion of American popular song of the late 19th and early 20th centuries.

So, it is no surprise that his Piano Trio (2014, written for the Delphi) moved fluidly among modernist styles with massive dark textures in the opening of the piece to Gershwin-like bluesy harmony at the start of the slow movement.

That is not to say the work isn’t strikingly original. Indeed, the slow movement’s sighing harmonies and deftly wandering melodies almost sounded like a jazzy Alban Berg. And who would think of that?

The finale started full of machine-like clatter in the keyboard but with curving melodies in the strings. Another of Bolcom’s massive harmonic strokes wiped that away, leading to a quiet conclusion like ripples in a pond dissipating after a big rock was chucked in. The Delphi played the piece with authority.