"In his music — a vast and varied catalog that includes symphonies, operas, chamber music and song cycles — the most ingratiating and accessible strains keep company with gnarled dissonances." 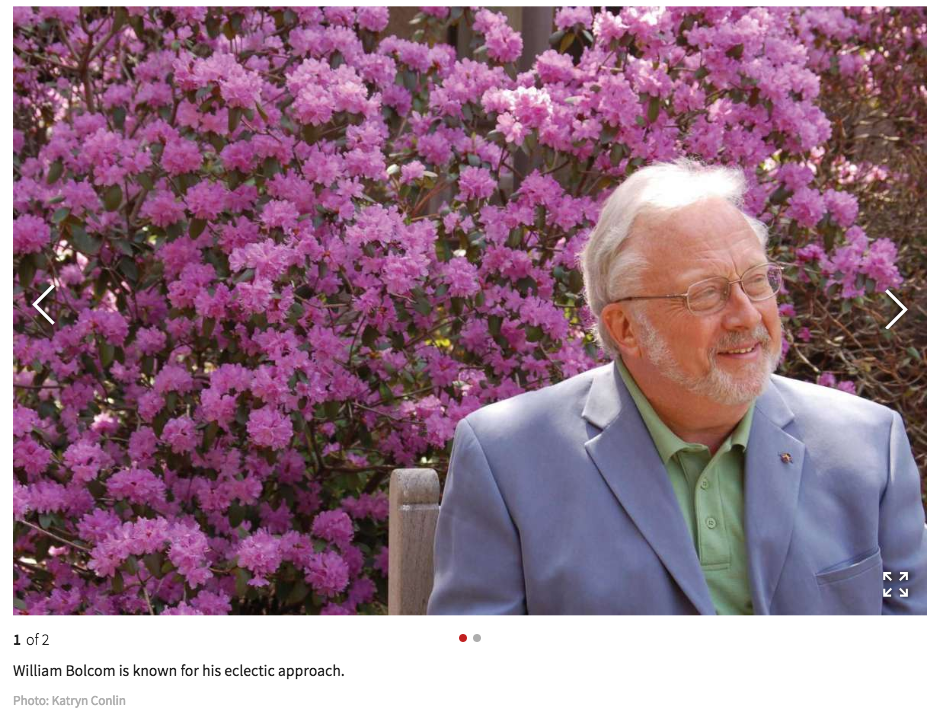 Composer William Bolcom, eclectic at 80, returns to the Cabrillo Festival

Trying to pin down a stylistic profile for the composer William Bolcom is a mug’s game, a bout of Whac-a-Mole against an elusive and wily opponent.

In his music — a vast and varied catalog that includes symphonies, operas, chamber music and song cycles — the most ingratiating and accessible strains keep company with gnarled dissonances. Ragtime and tango, Mozartean pastiche and full-scale modernism all take turns at center stage.

The reason for this omnivorous but carefully controlled hodgepodge is perfectly simple, says Bolcom.

“I have a huge palette of things I want to express,” he says. “So I just take what I want. And then if the styles are different, I try to make sure they’re talking to each other as seamlessly as possible.”

Bolcom, who recently celebrated his 80th birthday, was on the phone from the home he shares in Ann Arbor, Mich., with his wife and longtime collaborator, the soprano Joan Morris. He was gearing up for a return to Northern California and the Cabrillo Festival of Contemporary Music in Santa Cruz, where he was a regular presence during the 1970s and ’80s.

The second concert of the festival, on Saturday, Aug. 4, at the Santa Cruz Civic Auditorium, will include a performance of his 1983 Violin Concerto, with the Russian-born violinist Philippe Quint as soloist and Artistic Director Cristian Macelaru conducting. The piece, with its confluence of jazz and classical strains, is as representative a taste of Bolcom’s eclecticism as anyone could wish for.

In this case, though, he says he was influenced by the example of the Romanian American violinist Sergiu Luca, for whom the concerto was written.

“I got to know him in 1972 when he was first starting out,” he recalls. “Sergiu was a very fiery performer, and he was the first classical violinist I ever ran into who knew or cared about the jazz violin tradition. He befriended Joe Venuti, which is really where that whole tradition began.”