Now that Jell-O may be on the chopping block, let's take a look at its jiggly role in our lives.

A financial analyst has suggested that Jell-O may not survive the new merger between Kraft Food Group Inc. (which makes it) and H.J. Heinz Co. and “could be axed.”
Cue a shiver of despair. 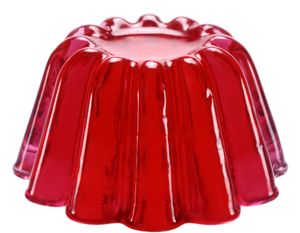 Over the years, it has been served in thousands of church basements, enabled millions of liquor-laced shots at college parties, provided the concoction in which bikini-clad women wrestle. (A myth, it turns out, but we’ll get to that.)

For no discernible reason — although we suspect Garrison Keillor’s hand in this — Jell-O is linked with Minnesota.

“People have a misconception that people from Minnesota make green Jell-O, but whenever my family thinks about Jell-O, we think raspberry,” said Joenie Haas, who prepared her famous salad of red Jell-O and applesauce last fall when the Cooking Channel visited the family log cabin on Lake Mille Lacs.

It was a hit, just as when she first served it to her son-in-law Andrew Zimmern, star of “Bizarre Foods.” “Now, years later when I make it during the holidays, I have to make an extra batch just for Andrew,” Haas said. “It’s a timeless food memory. It brings us back to tradition and family.”

Yet many Minnesotans have a love-hate relationship with Jell-O.

Lutherans, in particular, are dinged for serving it at all manner of functions, with a particular bent toward funeral Jell-O. Moreover, they have bucked its description as a “gelatin dessert” and tend to saladify it with shredded carrots, celery and cottage cheese.

It was a staple of “The Morning Show” with Dale Connelly and Jim Ed Poole that achieved an almost cult status when it aired on Minnesota Public Radio.

So it comes as some surprise to learn that the ditty was not written by a native Minnesotan, but rather by William Bolcom, a Seattle composer who went on to win a Pulitzer Prize in music. (Not for the Jell-O song, but for “12 New Etudes For Piano.” Whatever.)

Yet Bolcom comes by his Jell-O credentials honestly.

Two of his grandparents were Minnesotans, he said, “so of course I grew up with Jell-O like everyone else. It was a fact of life. You ate it without noticing what you were eating.”

The song emerged after Bolcom visited a restaurant that served an old-fashioned “ladies lunch” — think maraschino cherry garnishes and congealed salads. “I got a fit of the giggles,” he said, and inspiration followed.

Bolcom, who lives in Ann Arbor, Mich., said it’s difficult to believe Jell-O might no longer be made, unless the “newly minted Kraft-Heinz executives are too young to remember it. I’m guessing lots of people feel nostalgic, not so much for Jell-O itself but for the time they ate it as children.”

Gelatin desserts have been around for centuries, but were served only to royalty, who likely never witnessed the simmering cow hoofs that made possible the quivering, moldable finale to their feasts.

Jell-O itself didn’t happen until 1897, when Pearle Bixby Wait of LeRoy, N.Y., added fruit flavorings to granulated gelatin and sugar and called it Jell-O. Today, LeRoy is home to the Jell-O Gallery Museum, which last year hosted about 10,000 visitors.

Over the past four years, Jell-O sales have fallen by 19 percent, according to industry figures for the “dry packaged desserts category.”
If Pinterest has become our cultural DIY reflecting pool, much of today’s Jell-O is consumed as boozy shots fashioned into clever shapes, or just poured into Dixie cups.

Speaking of parties, let’s get Jell-O wrestling out of the way.

Turns out they don’t really use Jell-O, but something called Fun Jell that creates a “tighter” mix that won’t break down after being flung, stomped and squished.
It’s sort of sad, because if wrestlers really used Jell-O, they would need (by Fun Jell’s calculations) 269.3 gallons of it to fill a 6- by 3-foot kiddie pool 2 feet deep — or about $500 worth of product. That’s a bottom line that has nothing to do with bikinis.

So it is time to start a Jell-O death watch?

A Kraft spokesman told MarketWatch that Jell-O has been “in the lives of American families for over 100 years. Not many brands can say that.”
True enough. Yet food writer Carolyn Wyman once credited its fame to being “the food that most resembles a toy.”

Is it possible that we’re growing up?