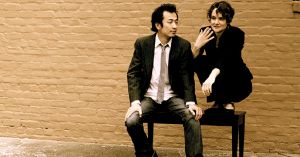 In five years of existence the dynamic piano duo ZOFO (“20-finger orchestra”) has racked up two Grammy nominations and a competition win. Perhaps more impressively, they’ve given 11 world premieres of commissioned works. They brought the latest of these, by William Bolcom, to Morrison Artists Series at SFSU on Sunday afternoon, while dazzling the audience in a program of contemporary works.

…. Closing the program was Bolcom’s Primer: Eight Studies for Piano Four Hands. The composer was in attendance and described the piece this way: “… a series of short studies involving unusual hand displacement, rhythmic counterpoint, and the like.”