Grant Park Music Festival concludes with premiere for audience of 12,000 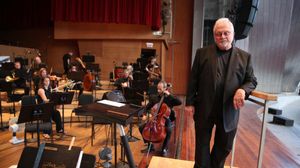 William Bolcom’s exciting Grant Park Music Festival residency in Chicago concluded with the world premiere of his new orchestral piece written for the festival, Millennium: Concerto-Fantasia. The piece premiered to a packed Pritzker Pavilion, with an estimated 12,000 filling the Seating Bowl and Great Lawn.

Describing the piece’s genesis and background, Bolcom writes, “In 2000 a fascinating Cambridge University conference on all aspects of time discussed, among other things, the history of century-marking, [and] the presence of the number 60 in minutes & seconds…I was invited to give a paper on the difference between real time and musical time, real time being calibrated by the steady beat of the cesium atom used in Greenwich time and musical time guided by how music goes – fast or slow, excited or calm, formally loose or tight. So many of the institutions of the previous millennium are currently under heavy review…in music, one of them may be the orchestra itself. Many of us have feared the funneling of the opera house, the concert hall, the symphony into one big enclave of the rich musical past. Though there is still a passionate audience, and schools of music and conservatories are turning out very talented artists performing this music, many, many people in our society do not relate to this culture at all. It is clearly up to us in music to invite these people into our enclave and to the many beauties waiting for them.”

Bolcom continues, “Thus Millennium. When Grant Park commissioned me for a work, I drew on my thoughts about time from fourteen years ago and began to think of the orchestra’s history of the last four centuries. The piece is a concerto for orchestra with a progressive musical form. There are several passing sections like chapters in this one-movement piece, played without pause: Introitus, Rockets, Dreamscape: The Love Dream, Rude Awakenings, and A Conclusion, for Now.”

Bolcom concludes his thoughts with great sentimentality, writing, “…Millennium has the positive charge of being premiered in a millennial park in a vibrant, evolving city. And here we all are together in this park, hearing a new piece.”

Listen to an audio recording at Soundcloud