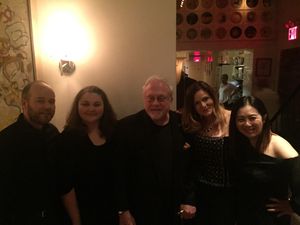 "We wanted to pay tribute to the busy schedule that he is keeping even at 80; an itinerary not unlike ones he has kept for his entire career.'

From the E.B. Marks Newsletter: Read the newsletter online here

William Bolcom turns 80 on May 26th, a fact that we and many others in the music press have mentioned many times thus far this year. Yet, in this month's newsletter - the month of his birthday - we wanted to pay tribute to the busy schedule that he is keeping even at 80; an itinerary not unlike ones he has kept for his entire career. Mr. Bolcom will be spending his actual 80th birthday as he has spent much of his professional life, along with his life and performing partner, singer Joan Morris: on the road (or in the air, to be specific). This year finds him jetting from his home in Ann Arbor, Michigan to New York City to Bellingham, Washington to Los Angeles to Paris and London in a single month. It is no surprise that there are a few World Premieres peppered in as well. In homage, and in awe, we present a little bit of the Bolcom itinerary below. If you squint, we believe you can see him in two places at once. Happy Birthday, Bill!

April 29: World Premiere of Dark Dreams That Will Not Disappear for Viola and Piano (Jacob Adams, viola and Angela Drăghicescu, piano) at Merkin Hall, New York City (in attendance) REVIEWED

May 4-6: Symphony No. 2 (“Oracles”) performance at Western Washington University (in residence)

May 11-12: Performances of piano music (by Lori Sims) and Symphony No. 1 at The Gilmore Keyboard Festival, Kalamazoo, Michigan (in attendance)

May 20-25: Bolcom & Morris in residence at Songfest, Los Angeles, California

September 15: World Premiere of An Ann Arbor Saturday by the Ann Arbor Symphony (in attendance)